Founded in the early 1990s, OROTIG S.r.l. initially developed a particularly sophisticated technology for titanium casting, a material largely used in the dental sector, and particularly difficult to cast and work with.

The experience acquired over the years whilst identifying solutions for a range of market demands, allowed OROTIG’s team of engineers to extend the use of this technology, initially designed for welding titanium, to weld all metals , expanding its range of applications from dental to jewellery sector, and even to the more complex industrial applications.

OROTIG was the first company in the world to produce a very compact in size LASER-welding equipment.

The XXS model, introduced at the beginning of 2005, revolutionized the LASER sector due to the fact that, thanks to its reduced-in-size dimensions, it was the first machine in the world to meet the demand for compact welding equipment, to contain initial investment costs whilst keeping high levels of performance, quality and reliability.

Over the years, OROTIG has also developed specific products, such as diode-LASERs for the dental sector, LASER-markers for engraving and cutting of different metals and materials for either jewel makers and light industry applications and fibre-LASERs for other industrial applications.

The fruit of the evolution of a project begun in 2005, the first LASER-marker was introduced at the beginning of 2008. Initially designed for the personalization/marking or writing of predominantly mechanical objects, today OROTIG LASER-markers are at the service of the most prestigious jewellery manufacturers around the world, satisfying daily performance of the highest standards of quality and performance.

1992
Orotig was born developing innovative technologies for the investment casting and welding of titanium, which made it possible to use it in the dental sector.
2000
Continuous research and experience gained over the years have allowed the Orotig team of engineers to extend this technology to the processing of all precious and non-precious metals, by expanding the fields of application to the goldsmith and industrial sectors.
2005
Orotig was the first company in the world to produce a compact laser welding machine. The XXS model, presented at the beginning of 2005, revolutionized the market and led the company to be the reference.

XXS was the first machine in the world able to satisfy needs of space, containing costs and maintaining very high-performance standards, quality and reliability.
2006
The company has expanded the offer of specific products such as the diode laser for the dental sector, the laser marker for engraving and cutting, the industrial fiber laser for robotic industrial applications and the milling machine for the dental technology sector.
2008
The result of the evolution of a project born in 2006, Orotig presented the first fiber laser engraving machine in 2008. Today Orotig laser engraving machines are at the service of the most prestigious jewelry manufacturers in the world and satisfy every day the highest quality standards.
2011
Since 2011 the company has further consolidated itself as a market leader in the goldsmith sector thanks to the line of EVO and REVO welders and the line of Open and RR engraving machines, the first to fully satisfy the power, precision and reliability requirements of production processes of all precious metals.
2019
In 2019 Orotig develops the revolutionary TDL, a combined dual-source and CNC laser system, capable of providing the customer with an integrated solution for the mass production of marked and cut objects up to 4 mm thick.
2020
In 2020 Orotig presents EVO X, the most technological, efficient and performing welding laser in the desktop category. This new line, equipped with an operating system capable of meeting all the requirements of an industry 4.0, is able to go from a simple work tool to a real production system. 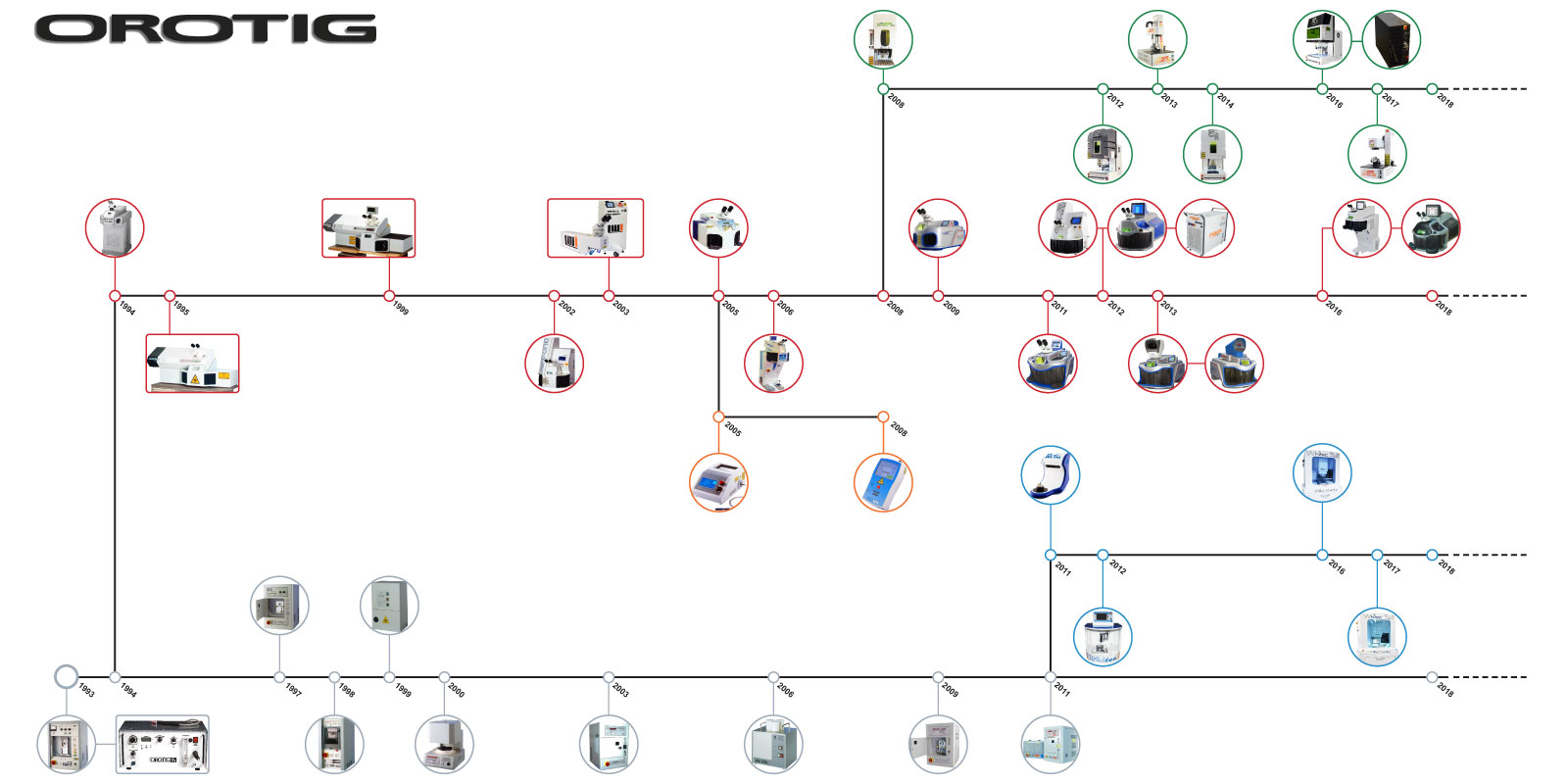